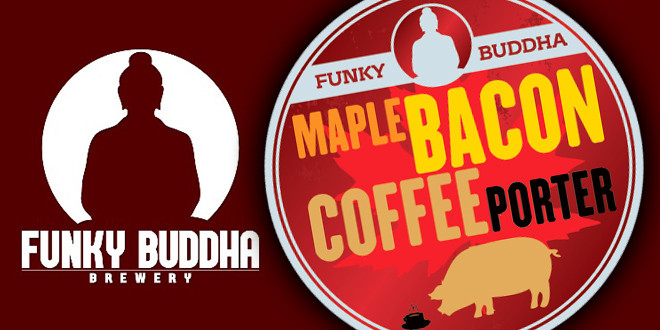 A diner breakfast in a glass!

I have to tell you about this beer Scott and I tried that was simply amazing! Maple Bacon Coffee Porter from Funky Buddha Brewery.  I know the name might be unsettling but OMG&HMWAS (Oh My God & Hit Me With A Shovel) it was brilliant.  It was way better than Voodoo Doughnut from Rouge, in terms of drinkability and far better than the bacon infused beer we tried to make. Yuck!

So how did we get this beer? Well I emailed Funky Buddha Brewery and got a response form John Lynn, their Brand Director. After a few email exchanges he was awesome enough to send one our way. Now it didn’t have far to travel. Funky Buddha Brewery is located on the east coast of Florida in Oakland Park. What started out as a hookah and tea bar serving some of the finest craft beers in Boca Raton, quickly outgrew itself and owner Ryan Sentz needed some more space.

That is when Ryan took the opportunity to turn his home-brewing hobby into a career and opened up Funky Buddha Lounge & Brewery in 2010.  It’s no surprise it was an instant success.  And the beer John sent us, Maple Bacon Coffee Porter, is every indication why. It is a complex beer with sensational smells and tasty flavors. Smokey, salty, maple, bacon with some roasted bitterness; it truly is a diner style breakfast in a glass and propelled Funky Buddha to the #27 Brewery in the world by commenters on RateBeer.com.  You can read more about their history > here <.

We were very fortunate that John sent us this beer. It was released in January 2014 and three thousand bottles were sold exclusively at the brewery to over 4000 people attended. We plan on making a visit and if you are in the Oakland Park area you must stop by. This lounge-y, live music, brew house is sure to impress.

A big thanks to John Linn & the rest of the Funky Buddha Crew.
Keep up the very good work

ps. Keep on the look out for our video review.

Brendan is Scott's Ed to Johnny, Chuy to Chelsea, Andy to Conan, Guillermo to Jimmy... You get the idea. He loves his family and friends but doesn't mind stopping to have a cold craft beer that makes him late for important events, ahhhhhh. He too is a hop head but since joining The BeerCritic has expanded his beer horizons, along with his belly, and truly enjoys the different tastes and styles the beer crafters have created. Beer is proof that God loves us. Cheers
Previous: Samuel Adams Rebel IPA
Next: Apocalypse IPA