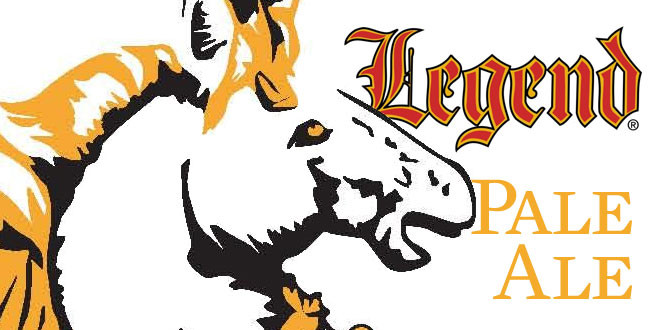 As I reached into my beer fridge today, because everyone has a beer fridge, I pulled out a Legend Pale Ale.I don’t know where this beer came from, it was either mailed to me or it was a beer swap. Regardless I have to try it and since I never heard of the brewery, it’s a great opportunity to discover something new together.

Tom Martin, the founder of Legend Brewery, grew up in a bottle of beer; it was only a matter of time before he joined the industry. Tom’s father was the Vice President of European Brewing Operations for Anheuser-Busch, and the original brew master at the Budweiser plant in Williamsburg, Virginia.  Do I need to go on? Really?!?

Tom wanted to follow in his father’s footsteps, naturally, so he earned a Masters Degree in Brewing Science from the University of California, Berkeley and went to work as a brewer for Anheuser-Busch. We cannot judge him for that. In 1993 he ventured out on his own and started Legend Brewing Company. He began with 4 of his own recipes that included a Brown Ale, a Lager, Pilsner, and Porter. In 1994, Tom opened a tiny tasting room/pub in Richmond, Virginia’s Old Manchester District. It quickly became a popular fixture in the city and another place I have to visit on my bucket list.

Tom has over 20 years of successfully brewing his Legend Beers and his brewery is the largest independently owned craft brewing companies in the state.  Over the years Legend Brewery’s reputation has grown and so has its line up of beer, including a Pale Ale, which I am having.

I grabbed my Pale Ale glass (aka, empty glass in the cupboard) and quickly poured. The beer is a copper in color and looks inviting. The smell is malty with a touch of citrus. And the taste is good. It has a slight bitterness but more malt. Second sip is definitely more malt but it’s well balanced, I get a taste of pine almost near the end.  This beer reminds me of a hometown tavern.  I could just see this on draft, having out at the bar and having a good night.  It’s worth a try!

Brendan is Scott's Ed to Johnny, Chuy to Chelsea, Andy to Conan, Guillermo to Jimmy... You get the idea. He loves his family and friends but doesn't mind stopping to have a cold craft beer that makes him late for important events, ahhhhhh. He too is a hop head but since joining The BeerCritic has expanded his beer horizons, along with his belly, and truly enjoys the different tastes and styles the beer crafters have created. Beer is proof that God loves us. Cheers
Previous: Smutty who? Smuttynose!
Next: Episode 33 – Heady Topper