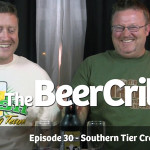 Episode 30! Welcome back to ... END_OF_DOCUMENT_TOKEN_TO_BE_REPLACED

The Duck Rabbit Craft Brewery is based out of Farmville, NC and was founded by a former University philosophy teacher, Paul Philippon. His label is derived Gestalt-style image called the Duck-Rabbit diagram. This diagram can be found in the Philosophical Investigations by Ludwig Wittgenstein. Not the other Ludwig’s, because there are so many of them, @_@. I feel like I’m doing a research paper, geeze louise. Anyway, Paul likes the idea of using a logo that had ties to his former life. END_OF_DOCUMENT_TOKEN_TO_BE_REPLACED