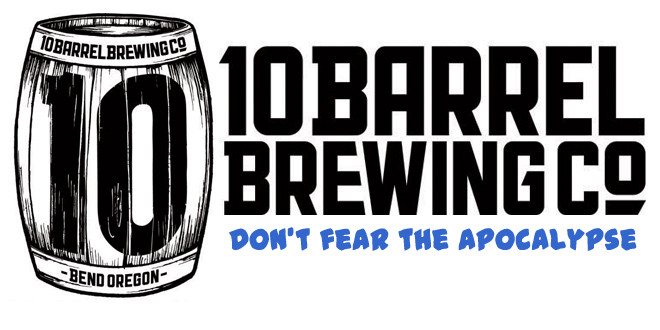 Hey! Hey! Hey! I had this beer today. No, I am not breaking into song but I wanted to share this written review with you, since I didn’t share any with Scott.

10 Barrel Brewery is from the beautiful state of Oregon. It was originally, in 2006, a small start up called “Wildfire Brewing” founded by 2 brothers Chris and Jeremy Cox (insert Beavis & Butthead laugh).  Chris & Jeremy were already successful bar owners in Bend, Oregon but had a desire to make their own beer and sell it to other local restaurant establishments.  In 2009 they changed to the name to “10 Barrel Brewing” teamed up with 2 award winning brewers and things started to take off. In 2011 they were able to hire brew-master Jimmy Seifrit, who helped them grow form a 10 barrel brew house to a 50 barrel brew house.

Chris & Jeremy’s 10 Barrel Brewpub has become a local favorite near downtown Bend, OR.  With their popularity and success growing they expanded and opened a place in Boise, Idaho in 2013.  And why not, Boise is awesome (I’ve never been) and this move helps them reach more of the Northwest.

As for Apocalypse IPA, quickly becoming one of Oregon’s top IPA’s, It’s aroma has that grass and citrus smell that immediately lets you know it’s and IPA and It looks a golden amber, clean but not see through. Whoa!  It’s bold! Hops right up front followed by citrus, malts, sweetness and than a little more hops. I get a slight taste of cameral and roasted/toasted flavor. Not a lot but enough to let you know it’s there.

I have to say it’s a pretty unique taste.  I am not sure what to compare it to, so in my book that is a good thing! After a long hot day in the sun, it’s pretty refreshing; though I wouldn’t go crazy it packs a 6.8% abv. that will definitely sneak up on you.

If you are anywhere near the Northwest of the United States you should you might want to give this a try, or maybe get to the Cox brother’s (insert Beavis and Butthead Laugh) 10 Barrel Brewpub. Maybe in the future they’ll expand to the Southeast and their future does look bright.

Brendan is Scott's Ed to Johnny, Chuy to Chelsea, Andy to Conan, Guillermo to Jimmy... You get the idea. He loves his family and friends but doesn't mind stopping to have a cold craft beer that makes him late for important events, ahhhhhh. He too is a hop head but since joining The BeerCritic has expanded his beer horizons, along with his belly, and truly enjoys the different tastes and styles the beer crafters have created. Beer is proof that God loves us. Cheers
Previous: Funky Buddha
Next: Shiva IPA