Home » Beer Reviews » Specialty » Starr Hill Lucy
After such an interesting bouquet the flavor doesn't disappoint. Right off the bat the lime jumps out at you and grabs a hold of your taste buds and doesn't let go throughout the entire drink. 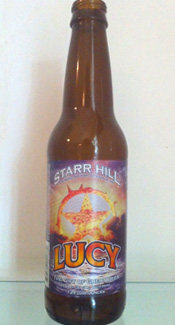 Appearance: Poured a very clear, golden straw color with a micro-fine two finger head. Sadly the head fizzled down to a film pretty quickly leaving behind little to no lacing.

Smell: …Quite interesting. Lots of spice going on in the nose of this strange brew. The first scent to jump out at you is lime..yes I said lime. With a strong mixture of coriander and candied ginger. If you think that these scents may sound like they may not belong together…you could be right. The coriander is nice but the ginger and lime seem to overpower the scent making it smell a bit like an astringent.

Initial Taste: After such an interesting bouquet the flavor doesn’t disappoint. Right off the bat the lime jumps out at you and grabs a hold of your taste buds and doesn’t let go throughout the entire drink. Some ginger (tastes exactly like the pickled stuff that comes with sushi) makes it way through the cloud of lime but sadly the coriander is almost non-existent. Finish is limey with a bitter/sour hop aftertaste.

Thoughts: Starr Hill makes some great beers like their Amber Ale and Northen Lights IPA , so these guys are no strangers to brewing top class beer. However when it comes to Lucy this reviewer thinks it should have been left on the shelf. I’m sure there are a selection of people who really like lambic style beers who might enjoy something as unique as Lucy. While the idea of a lime and ginger beer with coriander might sound enticing the balance is just too far off. Lime is a very overpowering flavor when added to beer (or any drink for that matter).  It’s presence in Lucy is just too strong making this beer taste more like a certain macro lime beer (initials BL Lime). I highly recommend you try this beer to develop your own opinion. It truly is a beer unlike anything I’ve had before. So on that bombshell, happy drinking!