Home » Beer Reviews » Ales » A Little Sumpin’ Sumpin’ Ale
Hops, hops and oh...hops! For being a wheat beer this sucker smells like it is loaded with hops. Lagunitas claims it has every hop starting with the letter "c". Certainly smells like. With scents of pine, apricots, grapefruits, peaches and some pale malts climbing into your nose all at once, this beer is a powerfully scented beer. The mind immediately expects an IPA style taste to follow. 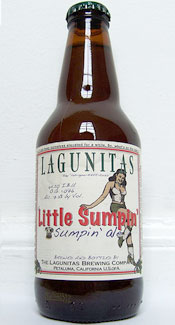 Appearance: Pours a clear, golden orange with a bright white one finger head. The head quickly  falls to a film leaving behind some scattered lacing on the glass. There is also quite a bit of visual carbonation.

Smell: Hops, hops and oh…hops! For being a wheat beer this sucker smells like it is loaded with hops. Lagunitas claims it has every hop starting with the letter “c”. Certainly smells like. With scents of pine, apricots, grapefruits, peaches and some pale malts climbing into your nose all at once, this is one powerfully scented beer. The mind immediately expects an IPA style taste to follow.

Initial Taste: Surprise, the initial flavor that comes racing across the mouth is ….Hops! Just like the smell, the flavor is big on the hop spiciness but not nearly as heavy as the smell leads on. A bold yet complex potpourri of wheat, grapefruit, citrus and pine coat the mouth in a flavorful and slightly bitter flavor. While this is indeed a wheat beer (brewed with 50% wheat) the flavor profile is much more that of an IPA. Yet unlike an IPA this has a nice grainy sweetness on the end that helps balance out the hops. Little to no alcohol taste even with an abv of 7.3%.

Thoughts: Lagunitas has always been known for quirky and unique beers but this one takes the cake. The name alone gives the reader a hint that this beer is more than meets the eye. Being labeled as a wheat beer due to being brewed with 50% wheat, Lagunitas decided to change things up and toss in a score of hops. Not just a score but every hop starting with the letter ‘C’! I’ll let you count how may that actually is. What you end up with is an IPA with a wheat beer base…Delicious. Lots of complex hop spiciness with a good pale wheat malt backbone. And good news for hop-heads, in the fight for power between the hops and pale malts the hops certainly win out. This is now one of my favorite beers from Lagunitas and I’m not even that big of a hop lover! I highly recommend this little sumpin’ sumpin’, but you better hurry because this is a summer seasonal and it won’t last long. Cheers!