CHAAAAARRRRRRRRGGE!  That’s what they say in all those revolutionary war movies, right?  The only one I remember seeing is the Patriot, and that was pretty good and sad (sniffle).  By now you are saying, “what the hell is he talking about?” Well, I am talking about 16 Mile Brewing Company. 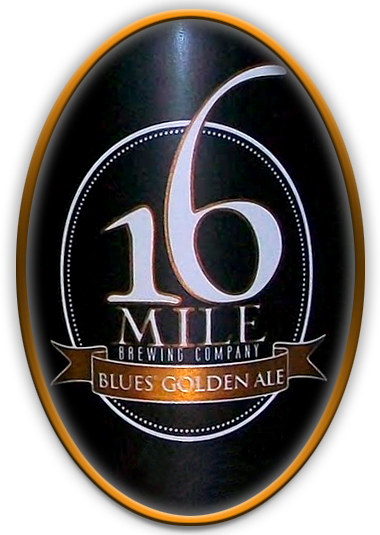 Not being familiar with the brewery,I had to look them up. This is the part I love, discovering new breweries.

16 Mile is based out of historic Georgetown, Delaware. Owners Chad Campbell and Brett McCrea are Delaware natives.  The funny thing about these guys, they never knew each other growing up even though they both attended the same high school AND college! Find out more about them here >>

Now the significance behind the name 16 Mile dates back to the 1700’s when Georgetown was known as “Pettijohn’s Old Field “. It was located in Sussex County and was, get this, “16 miles from anywhere”.  How you like me Drew! Drew is my cousin who is an award winning history teacher.   For more on the 16 Mile Significance <click here>

I am trying 16 Mile’s Blues’ Golden Ale.  Now Chad and Brett went the extra mile on their bottles (no pun intended) besides the number 16 they also decorate their bottles with historical landmarks and culture from Delaware.  The funny thing about the beer I am drinking, it’s named for The Delaware Blues who fought in almost every battle of the Revolutionary War and on the bottle is a picture of a monument that is located outside Legislative Hall in Dover, Delaware.  I WAS BORN IN DOVER, DELAWARE! Okay, it’s not funny to you but it is to me.

Now it’s time to drink up. I promise not to be biased. It is a lovely pale gold color and smells grassy and doughy, like bread.  Ohhhh, very nice in taste, smooth and light.  I love the balance. It’s not over the top, more like a K.I.S.S. Keep it simple stupid.  It feels like a summer beer with a little bit of lemon taste. I do like my hops but I would have no problem reaching for this beer anytime of year.  Nicely done Chad & Brett, this is a refreshing session beer that The Blues’ would have enjoyed.

Brendan is Scott's Ed to Johnny, Chuy to Chelsea, Andy to Conan, Guillermo to Jimmy... You get the idea. He loves his family and friends but doesn't mind stopping to have a cold craft beer that makes him late for important events, ahhhhhh. He too is a hop head but since joining The BeerCritic has expanded his beer horizons, along with his belly, and truly enjoys the different tastes and styles the beer crafters have created. Beer is proof that God loves us. Cheers
Previous: Physics and Green Beer Bottles
Next: Episode 18 – St Patty’s Day 2013